Recently my girlfriend went in for a standard check-up and was diagnosed with an STI. Neither of us have ever had any symptoms, and now I can’t help but worry that she’s been cheating on me. I don’t know what I should do about this situation and if my worries are unfounded. What should I do?

The most pressing thing to do right now is to take care of your health. Many people are diagnosed with STIs, and it’s very common for people to have no symptoms. But just because it doesn’t burn when you pee or have warts or lesions doesn’t mean that an infection is not doing damage to your body. Make sure you follow your doctor’s treatment plan. For a bacterial infection like syphilis, gonorrhea, or chlamydia, that’s generally a couple weeks of antibiotics and abstaining from sex. Viral infections are chronic, so they will require monitoring and treatment dependent on the infection and strain.

With treatment and monitoring, no STI is deadly.

Now that my little PSA is done, let’s move onto the emotional stuff. Being diagnosed with an STI can bring up a lot of different emotions and thoughts. It’s normal to worry about what else is going on — after all, you didn’t know that this was in your very bodies. It’s very possible that you or she brought an STI into the relationship, and it’s lain unnoticeable this entire time. 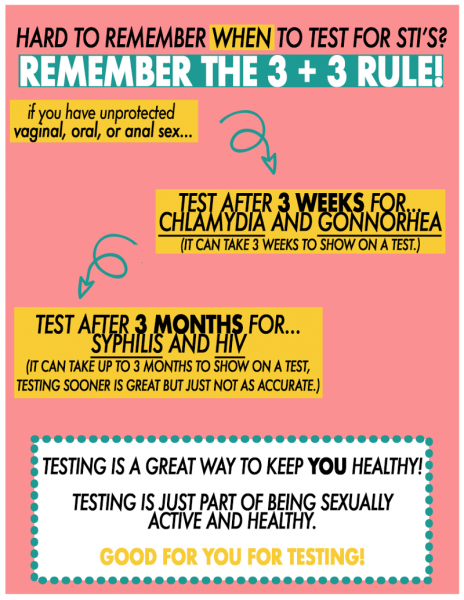 If you knew your statuses prior to beginning a sexual relationship, it would be far easier to pinpoint when and how an STI became a third wheel to you. That being said, most people don’t end up getting tested as often as they should, so it’s hard to really Nancy Drew that information out. I’m guessing we don’t have that kind of information here, so there are a whole lot of questions that don’t have answers.

I would caution against jumping straight to infidelity on her part, unless you had these suspicions beforehand. If you’re going through your memory bank with a fine-toothed comb, it can be really easy to string disparate pieces of memory together into a conspiracy. If you’re wearing pink-colored glasses, everything looks pink. That being said, if you’ve had trust issues in the past and something’s felt amiss, your feelings may not be completely unfounded.  If there have been changes in her behavior or a newfound secretiveness, then I would keep my eyes open. If you’ve never had such suspicions and she’s being the same as she ever was, don’t work yourself into a lather.

That being said, even if you have suspicions, being a dirtbag is not cool. Looking through people’s belongings and phones drives people crazy and could upset the equilibrium of your relationship, especially if she’s never been dishonest. If you’ve always had trust issues in your relationships, I would take a long, hard look at yourself and figure out where they come from. Protecting yourself is understandable, but hypervigilance is destructive.

Smash Talks: It Starts with You!