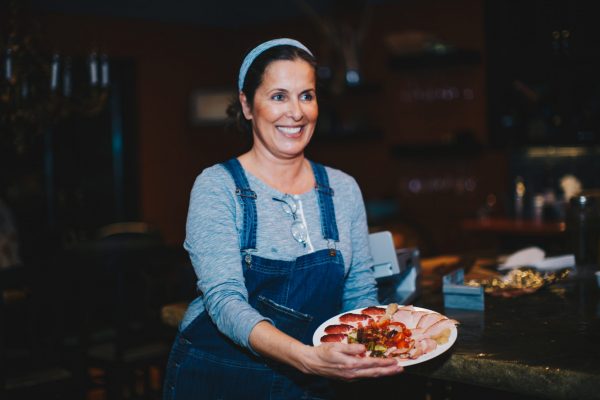 Sitting down to a meal of any kind at Aniko’s, you can be absolutely sure that there will be gourmet meats and delicacies available that you could never dream of preparing yourself — even if you knocked on her door unexpectedly in the afternoon, and she has no notice. She has piles of cured meats in the freezers, sliced and ready to thaw, or hanging in the garage, ready to go. Her larder is stocked with starters or ready-made meals, and she is a genius at using what she has on hand — she can turn anything into a meal in no time at all. The kind of person you would want in a war — the one who would make your pantry last six months instead of three. She displays a knowledge of food most people don’t. Not because it died out a generation ago, from overflowing shopping carts, but more so due to a general cultural ennui when it comes to doing more with less.

Her kitchen is so epic, you could easily seat 20 people (perhaps more) around her massive countertop, so massive that it could pass for a restaurant. I knew I was in for a treat because I have been at many parties and get-togethers at Aniko’s, but this time she was putting on a show. And what a show it was.

I don’t think I have had better food at five star restaurants. Certainly not better charcuterie. She is a genius with meat and it shows. 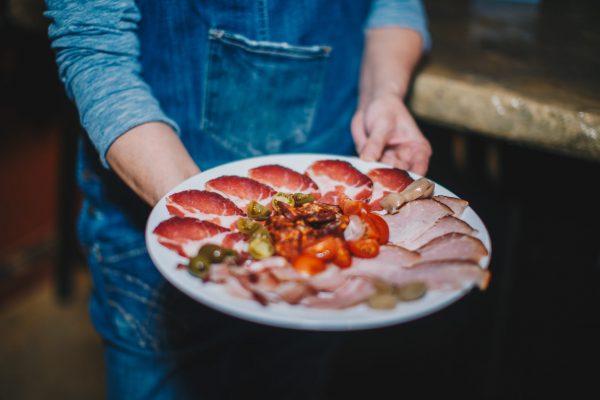 Beautifully arranged on a platter was an assortment of cold smoked meats, tomatoes, pesto, garlic scape butter, and pickles. Everything, with the exception of the fresh tomatoes (it’s pretty cold to be growing fresh tomatoes in Buffalo now), was either cured, pickled, or made by Aniko.

The meats were goose breast, Hungarian bacon, tarja, Hungarian sausage, and English bacon. All of the meats were cured by Aniko by brining, cold smoking, drying, and/or curing. It takes months for her to complete the process, and then the meat lasts for months (although not actually that long, since it gets eaten so quickly!). 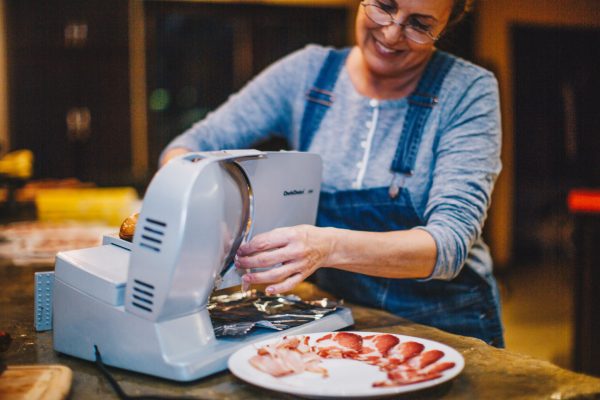 It had never occurred to me to add pesto or garlic scape butter to cured meats. As an Italian, I always ate my meat with cheese (mozzarella) and fruit (cantaloupe) so this was an eye opening experience. The garlic scape butter was my favorite — I put a dollop inside each piece of meat before I folded it and devoured it. Each meat had its own personality and flavor, and had something that made it stand out. English Bacon is a Hungarian name for a cut of meat similar to a tenderloin. It was the juiciest meat with almost no fat on it. The tarja is a cut that Italians may call coppa, which comes from the neck. It is a nice, dark, meaty cut, with fat around the large sections. It has a nice chewy texture and rich flavor, with buttery fat between to contrast the meat. This is the kind of slice that can get stuck in your teeth, and I willingly let it. Hungarian bacon is similar to regular bacon that we see here, but it has a huge amount of melt-in-your-mouth fat on it — way more fat than we typically have unless you specifically seek out such a cut. 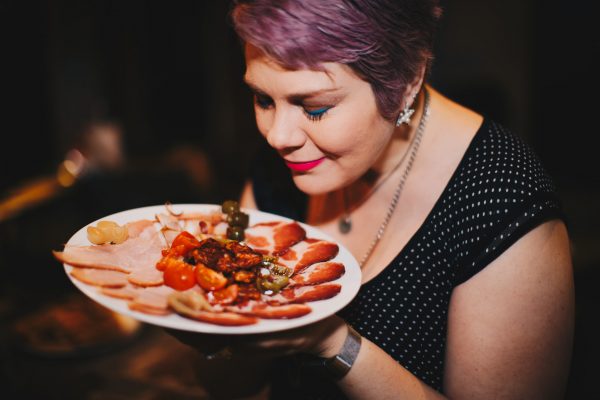 The fat, combined with the sinewy meat, made for a great mouth feel. The goose was the tenderest cured meat I have ever had. I didn’t know cured meat could be so soft. It was like butter melting in my mouth. It was fabulous — my favorite on the plate. The Hungarian sausage was dark red from being spiced with paprika, and had a flavor to it that the others did not, rounding out the plate nicely. The tomatoes paired well with the meats, too, something I had not tried before, as did the pickles. One gave a juicy sweetness, one gave a juicy acidic zing. The butter, however, was the item on that plate that made the meat sing. It was a game changer for me. But meat is what Aniko is famous for, and this plate was an all-star line-up of her talents. I hope you are fortunate enough to cross her path — she will likely have some sausage with her, and I know she would let you try some. 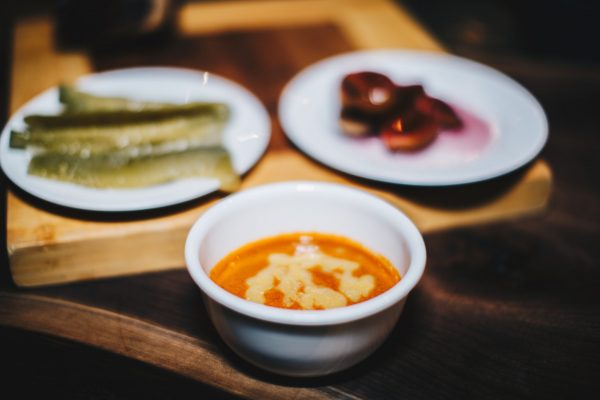 This dish couldn’t be simpler to make (according to Aniko) and managed to be the most delicious and flavorful tomato soup I have ever had. All that was in the soup were tomatoes from her garden that were roasted with olive oil and salt and peeled, then put in a blender with some olive oil, salt, paprika, onion, garlic, herbs, and some onion puree. The onion puree was roasted onions, sugar, salt, and olive oil, then pureed till it was a creamy sweet dip. The puree could replace butter or sour cream or Bison dip for chips, it was that good. The secret was her Vitamix — since it aerates the liquid so much, it gives an unbelievably super velvety texture to the soup. On top of the soup, she drizzled more onion puree. This was decadence in a cup. So rich, so filling, and so flavorful. With a fancy grilled cheese, this would be the perfect snow day lunch.

This dish is something Aniko improvises with whatever leftovers are on hand from the garden; no two versions are ever the same. The version I tried was kale leaves stuffed with rice, pork, onion, eggplant, and pesto, with gouda and parmesan cheese melted on top. She’s made versions of these with quinoa, chicken, tomato — whatever she has that needs to be used up and frozen. It is a truly versatile dish, and something she has mastered with her knowledge of cooking. 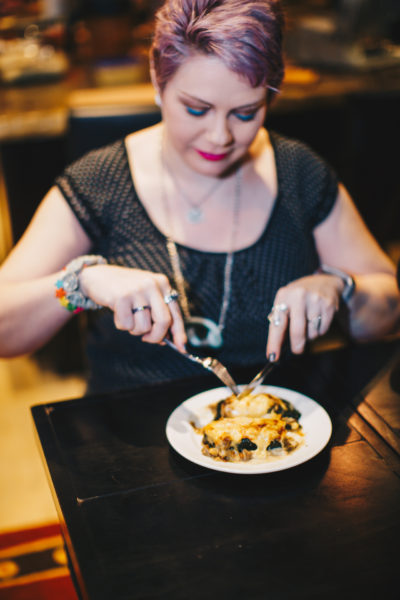 This was such a delicious new food for me. Having never really eaten grape leaves, I wasn’t sure what to expect. I had always seen grape leaves in a jar; cold, soggy, and uninspired. Aniko’s kale roll-ups were full of flavor and spice, but not so much that it was overpowering. The cheese on top was the unifying ingredient that made everything taste delicious together. I didn’t even notice I was eating eggplant (a vegetable on my ‘no’ list). The pesto was subtle — I didn’t notice it until she mentioned it, but, as soon as she did, the garlic notes sprang to the forefront. This was such a delight, and super easy to make (again, according to Aniko). She prepares these in the summer then freezes them, getting them ready to be pulled out of the freezer, thawed, and baked with cheese on top. Instant dinner, instant flavor. 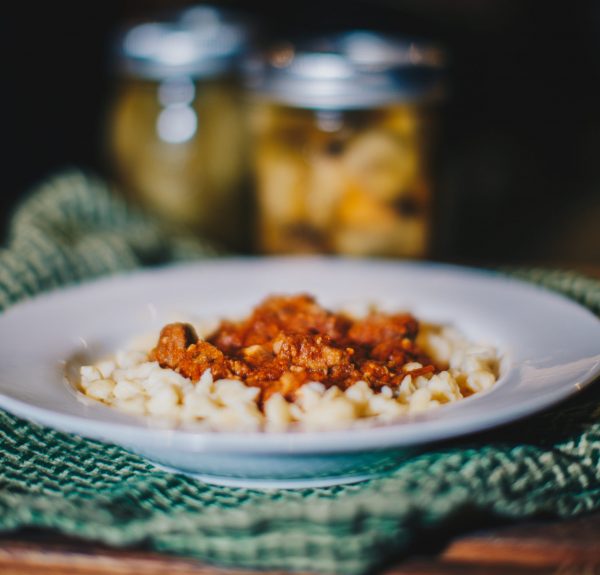 This dish was the main course for the evening. A classic Hungarian dinner – it’s as simple as it is filling. Every culture has their pasta and meat sauce; if you were German, it would be spaetzle; if you were Italian, it would be pasta Bolognese. This was Hungarian, so it was nokedli with pörkölt. This style of dish — a carb covered in a meat sauce — is my favorite type of dish. The pasta is made with thin, tiny teardrop/cylinder-shaped pasta that is instantly cooked as it hits boiling water. This, like any type of pasta, can be served with anything — butter, sauce, creamy melted cheese, you name it. This was served with pörkölt. If you have been paying attention, pörkölt is, as you may have guessed, a tomato-based saucy meaty stew full of pork and packed with paprika. The pasta was light and fluffy, which took to the dense sauce well. All you need is a big plate of this and you would be good for the night. I was spoiled, so I had all these other courses, but this is a hearty enough dish to stand on its own. The meat sauce had enough spices that it was flavorful and complex, and you didn’t need to add cheese on top like other pasta dishes.

Palacsinta with Peaches and Whipped Cream 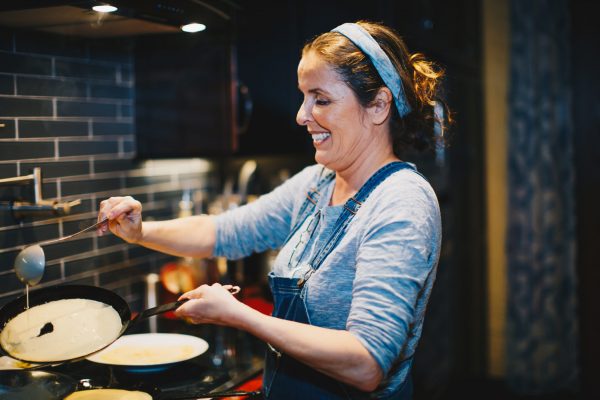 Dessert is always my favorite course. This was no different. Aniko whipped up some palacsintas, which are a thin crepe-like dessert, and was flipping them in the pan! It was quite a sight to see. She stuffed them with peaches that she canned from her own peach tree, adding whipped cream and powdered sugar on top. This was as simple as it was delicious. The palacsinta was delicate and light, and the peaches were sweet and juicy. There’s just something about eating something from a tree you can see from the window that makes it that much better. And who could complain about powdered sugar and whipped cream? It was the perfect end to the evening. Except it wasn’t the end….

Because it was Aniko, and Aniko is nothing if not extra, there was, of course, a bonus dessert. She popped open a jar of rum-soaked figs for us to try. I only had a half of one, but my goodness it was strong and sweet and absolutely delicious. Sitting there noshing, we rattled out things it could be paired with, from vanilla ice cream to cocktails. Instead of a cherry on top of things as a euphemism for an over-the-top perfect ending, it should really be a ‘rum-soaked fig’ on top. 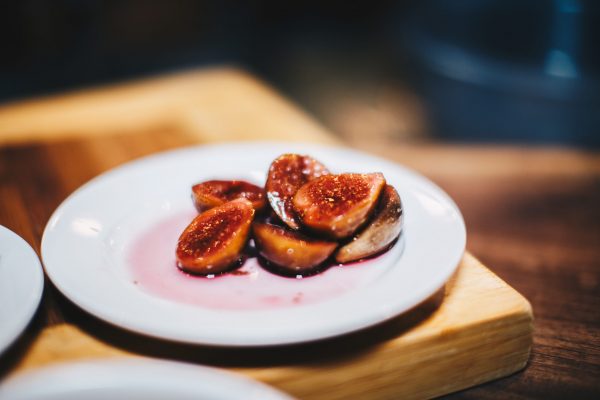 I have waddled out of restaurants before, being completely satiated and satisfied, but leaving Aniko’s house is always another experience. Some of it has to do with the generosity of her spirit, which just wants to feed you and feed you until you’re bursting, like an old European grandmother. The other part is that everything you are given is literally homemade, from a pig she butchered then cured herself, to the fruits and vegetables in every dish. Everything comes from her hands, or grown from the dirt in her backyard. It makes every bite more meaningful, and you are more appreciative of it because you can see and listen to the time, work, effort, and love put into everything. It was an absolute joy to share Aniko and her food with you. I hope one day she writes that cookbook she has in her. The world needs it.

To see all of the photos from this photo session with Aniko, please surf over to the gallery here.