Food lies at the heart of our bodies and our culture; it is there for celebrations and sustenance. NOMaste features a local fierce foodie each month, in four weekly segments. First, an interview, then a top 10 list, followed by a recipe to share, and finally a food review. This food corner will not just feature local chefs but also restaurateurs, buyers, suppliers — any woman involved in any aspect of the food chain, from farm to food truck. Join us each week as we get to know another Foodie in the city. 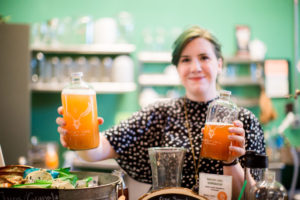 Kismet continues to play a strong role in the Buffalo food scene, and Tara Sasiadek’s case is no different. Hailing from a family of brewers and distillers, and an avid pickler and canner herself, it was second nature to take her love of food, fermentation, and family to the world of libations. The next logical step? Kombucha.

“I’ve always been interested in gardening and cooking. I’ve always thought of it as making potions,” she muses, amidst three large 100-gallon containers painted in homage to the Deathly Hallows of the Pottermore. Each tall tank is emblazoned with a wizardly symbol on its front — the Invisibility Cloak, Philosophers Stone, and the Elder Wand. It could not be a more fitting image to decorate the large vats that are making figurative magical potions within. 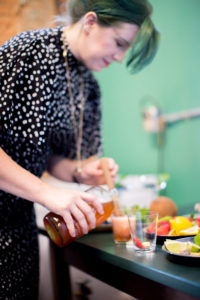 But before Tara was to become a kombucha entrepreneur, she had to actually try the stuff. It seems that kombucha appeared on the scene in just the past few years, going from ‘I’ve never heard of this,’ to ‘have you tried the new kombucha flavor I heard about on NPR?’ Tara happened upon this intriguing liquid a few years back at the Lexington Co-Op. She also had no idea what it was — just bought it on a whim, like you do when you wander the aisles of a grocery store for too long. We’ve all ended up with that random vegetable we can’t identify by name, or that odd-flavored bar of chocolate in our shopping basket. That day, Tara grabbed a bottle of kombucha. Not just plain old kombucha, but one with little chia seeds floating inside it. “It reminded me of Orbitz from the ‘90s. It was like, ‘This is weird — some alien weird thing — I want to try it!’ [It] was a weird experience [that] I came back for more of.” 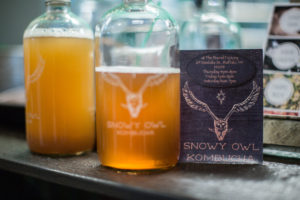 And come back she did. She quickly developed a bit of a kombucha habit. But necessity is the mother of all inventions (or recipes), and that is how Tara came to ferment at home. “I swear part of the reasons I started making it was that this bottle is $4-5. ‘This is ridiculous, I can make it myself!’”

So she did. She started making small batches at home, and then started to make some with her friend (later business partner) Andy Bannister, who also had a taste for the stuff. They would share images of her concoction online, like one does. They got a lot of likes, and friends started to ask for some if she could spare it. Tara, being a good hostess and friend, wanted to oblige every request, but it soon became apparent that she’d be making multiple gallons a week just to have enough to give to all the people who asked for some. It didn’t take long to realize that, if this was the demand of just a small circle of friends on Facebook, imagine what kind of buzz an actual business would bring. 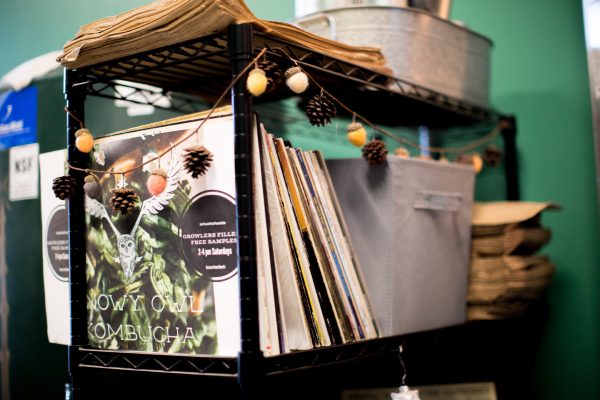 The leap from drinking kombucha from the store to making it at home might be a far cry to some, but Tara had already had some fermentation experience. She had been a part of a farm share a few years back, and it also included an unlimited ‘you-pick.’ Anyone who has ever been part of a farm share knows it is physically impossible to eat everything that you get each week, so you must learn to preserve your produce. “I was always canning and pickling and doing that kind of stuff. That became the adventure that summer — preserving everything.” After her farm share pickling-and-canning-extravaganza, kombucha was just a step up in the fermentation game. The process of canning and preserving her vegetables was the perfect lesson for starting her next passion. “When you’re making strawberry jam, you realize that you could be making lavender strawberry jam, and kombucha is just like that. I love combining different flavors.”

After she had discovered this wonderful elixir, and that she could make this herself, there was a fateful party in the woods.

Tara brought a massive amount of kombucha to this gathering, where she and her friends sat around drinking gin-kombucha cocktails all night. Thoroughly soused, they were convinced they’d wake up with wicked hangovers. The sun rose, and they magically felt bright-eyed and bushy-tailed. Was it the kombucha? It was the only variable, and it was kind of healthy, so was that the magical solution? “It was a magical omen” and all the evidence she needed — this was a magic potion indeed! It was that day that she and her then-boyfriend (now husband) started to joke about starting a kombucha company. 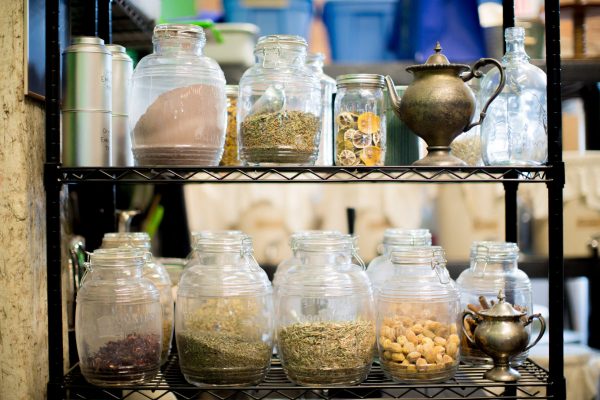 That joke proved to be less humorous as it was prescient. After a few years of checking out City of Night, the annual art extravaganza, Tara’s parents had come upon an old massive brick building that was once a barrel factory. Having toyed with the idea of going into business with their son, Adam Bystran, a long-time brewer and distiller, they set out and purchased the Barrel Factory. The aptly named complex is now anchored by Lakeward Spirits, where Adam is the master distiller.

Tara’s dream was to become a reality. After making kombucha with her friend and now business partner, Andy Bannister, they had decided to go ahead and become a real business. Slightly over a year ago they incorporated and became Snowy Owl Kombucha, and are now housed in the Barrel Factory. They have at least five flavors on tap at any given moment, and have revolutionized the kombucha world in Buffalo by turning a beverage usually purchased in a small jar at a store, into a place where you can sit at a bar and take a large barrel home. They even have a ‘bucha-share’ program, where you can purchase a share, just like a farm share, and get a sweet discount on your kombucha. 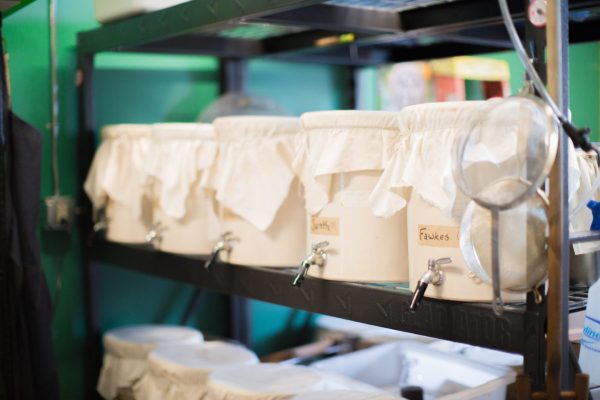 But Tara isn’t only about that kombucha life. She has a Master of Fine Arts and has always worked in the arts, whether it’s designing the logo for Snowy Owl, making adult coloring books, or illustrating graphic novels. For her master’s thesis she created a giant plush SCOBY (the active bacteria and yeast culture that is the foundation of kombucha) that filled a room, in which viewers were welcomed to come in, lay down, and become one large and ever-changing organism. Hearing this, one really wonders how there was every any doubt in her mind that she’d be slinging kombucha full time.

For nearly a decade she was a special educator, but now even with her full time Snowy Owl obligations, she still does workshops and helps students paint murals. Her artistic leanings have shown up at the Barrel Factory as well, in the form of Paracosm Arts. This endeavor allows Tara to curate art shows inside the Barrel Factory, focusing on how visual art, music, poetry, and dance can interplay with each other in any form, from installations, to performance, to traditional two dimensional works. They are currently gearing up to participate in the Buffalo-Niagara Tesla Festival, Friday, September 22, where the Barrel Factory will be hosting a VIP party and an Electric Circus. There will be food, drinks, art, and music inspired by Tesla, along with aerial performances and a lot of other surprises. You can even meet Nikola Tesla himself! (Well, I know who is going to play him, but I won’t spoil it). 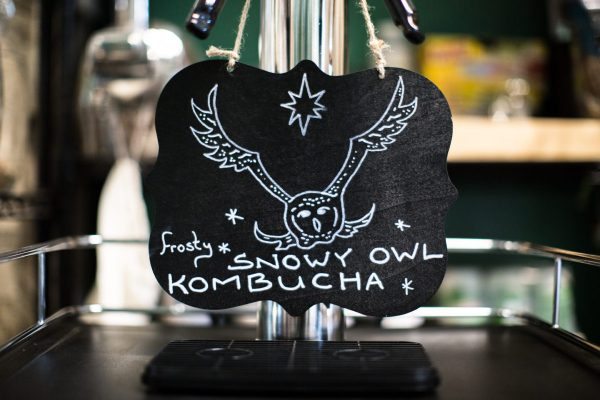 How did Tara end up being this incredible woman who has a finger in all the fermented pies?  It all comes down to a lifelong pursuit of her passions and allowing herself the freedom to try new things and pursue them to the fullest. Let this be a lesson to you timid grocery store shoppers — sometimes you gotta grab that one odd thing you can’t pronounce, or have no idea what it tastes like: it just may change your life. Can you imagine if Tara had grabbed something else? I think we’re all richer for the choice she made.