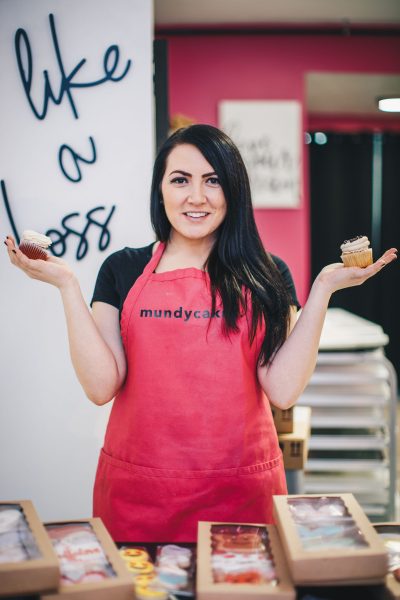 Amanda Bernardini jumped onto the cookie scene in a properly 21st century way: with her Instagram popping off, and pictures of her adorable and intricate cookies gracing the Internet everywhere, she became a viral sensation. I knew when I saw a photo of the fuchsia steps leading up to her bakery, Mundy Cakes, that I simply had to meet her. A kindred spirit, Amanda chose the same exact shade of Sherwin-Williams paint (Exuberant Pink) that also graces my house. In fact, my home and her bakery are painted in the same exact palette: black, white, and fuchsia. I knew we’d be a match made in heaven, and our sweet tooths were a perfect pair.

Walking into her bakery on a frigid January morning was a respite from the cold. I was immediately greeted with not just warm air, but that sugary vanilla smell of fresh baked goods that you’d expect. Also there to greet me was her black lab mix named Panda, who is the bakery mascot and the concept behind their logo.

The space was all aglow with pink neon, stylish black subway tile, and crisp white walls and shelves displaying adorable cookies and cupcakes. To think that a few months ago this space was empty and unloved, and in a mere three months has turned into this sweet and spunky sugar haven, is a testament to her village and the helping hands that made this dream a reality.

When Amanda was a kid, baking was a source of joy and family bonding. She fondly recalled those treasured gatherings of three generations of Bernardini women, especially Cookie Day.

“We did Christmas cookies every year; that was my favorite day… We’d all get together and make a bunch of cookies,” she said. 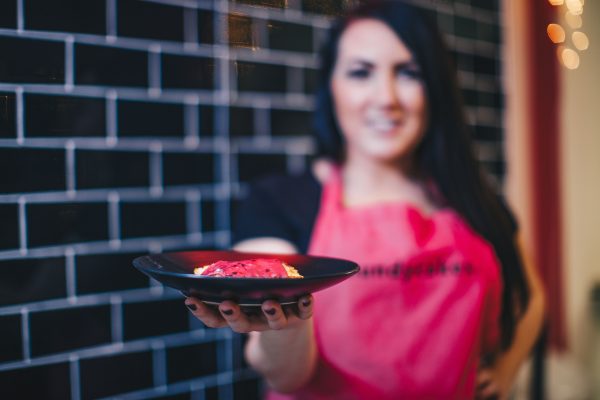 It’s no surprise that, years later, cookies would be the bread-and-butter of her baking business. But baking was not just a hobby for the Bernardini ladies. Her mother also had a side hustle, just like Amanda would later on. “My mom would make the old-fashioned wedding cakes, with the fountains and the pillars — she did a lot of that.” Perhaps being exposed to that entrepreneurial spirit gave Amanda the push needed to strike it out on her own years later.

She baked throughout high school and through college. At that point it was still a hobby, just for herself and when the mood struck. She never thought much about it — baking was just something you DO, like her mother and her mother before her. It was part of life. It wasn’t until her high school graduation, when she made a variety of different flavored cupcakes for a party, that she stood back and marveled at her creations, thinking: ‘Wow, these are amazing.’

After college, Amanda tried New York City life for a year. One full-time job and a few laps of the rat race later, she discovered it was ultimately not for her. Baking became more than a hobby — it was also her solace, and she started to experiment with designs and flavors. At first she was just baking for friends, being happy to supply them with cupcakes and cookies, which gave her an excuse to bake. Just like her mother, she started baking for friends of friends, and a side hustle was clearly burgeoning, even though she was not making any money. “I used to charge dirt cheap for the amount of work [I was doing]. I wasn’t making any money off of it,” she said. But after almost two years of baking without profits, she finally raised her prices and starting to make a profit. “It wasn’t until [I raised] my prices probably only a year ago that I started making money.” 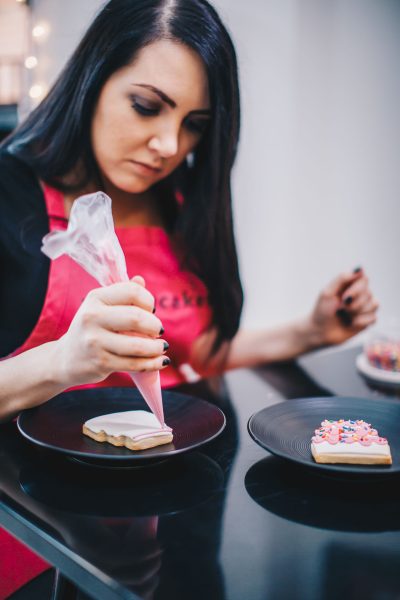 So how did the word get out about these cookies? In the beginning it was word of mouth, her larger network of friends, and one degree of separation beyond that. But then the magic of Instagram happened. With a little bit of luck, and being in the right place, with the right product, and the right time, Amanda went viral. ”Instagram is what really helped me get here…I had a big push through the Bills playoffs, and did some Bills cookies. I got on Spectrum with them and got a huge spike.” With the word of mouth spreading, custom orders were pouring in, and it was clear to Amanda that there was enough demand to warrant maybe more than just a side job. The side hustle was now encroaching on her regular hustle (which was working in mortgages). There seemed to not be enough hours in the day, and a decision had to be made.

Amanda decided to make the cookie gig legit. But it would require a lot of help, and a lot of dedication. Not wanting to leave her full-time job, which, while flexible in hours, still required a lot of time and attention, she worked on a game plan for making this business a reality. She found a spot on Allen Street which was too good to be true, and too good to pass up. A previous bakery, with an apartment above, the spot was a perfect fit for her. This opportunity would not arise again, so she signed the lease and started to make her move.

As with any business in the food world there was a lot of red tape, and navigating the bureaucracy was at times trying. “For me the challenge was just figuring out what kind of permits I needed. What do I need first — a building permit? A business license? In order to get that you need what type of inspection? That was hard for me, and it was stressful. I did cry in City Hall one day. I think it was hormones, but I definitely had a breakdown in the hallway.”

But, once the paperwork was in order, and she was given the green light to get to work, get to work she did! Thankfully her boyfriend, who has his own construction company, Pesono Development LLC, along with her family and friends, helped create the space that you see today. After moving walls, installing floors, building new displays, and painting everything in sight, the space was ready to open in just under two months.

And then, just before she was going to open, she got a huge surprise: there would be a tiny baker joining the family in May.

The plans were going to seriously change. 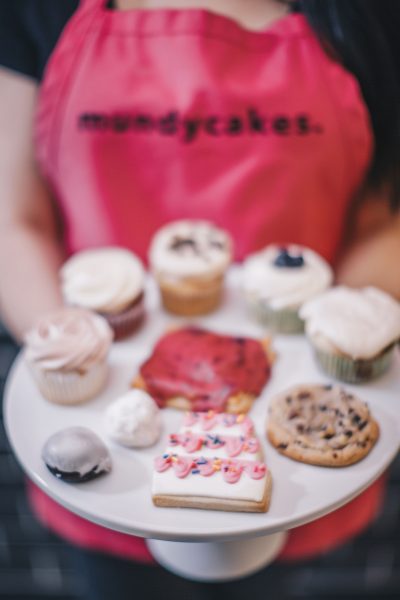 Before the exciting and surprising news, her concept for the space was quite different than it is today. “I had a vision of this being a late night dessert spot, with dessert garbage plates, a lot of fried stuff, ice cream sandwiches, and less custom orders. When I got pregnant I was like, ‘This is not going to work.’ I already had the space, I was already pretty close to opening, and I was in menu mode, figuring out hours…Then I was like, ‘OK, I don’t think that’s going to work, that might be too much for me right now.’”

But the ever-adaptable Amanda was able to rework her business plan to accommodate her soon-to-be change in lifestyle. As the old adage goes, if it ain’t broke, don’t fix it, so instead of a late night dessert spot, the focus was back on the custom orders and carry-out treats.

Since her business started out mostly custom orders, it seemed only natural to keep going with what was working, and slowly expand on the other parts of the business. While constantly pumping out custom orders, she still manages to have out displays of cookies for walk-ins, which is great for those who think they can place a last-minute order. “People don’t understand how much work goes into one cookie…it’s a multiple days process. That’s one thing that has been a struggle for people to understand — just how time consuming it is. I can’t tell you the amount of people who will be like, “’Hey, can I have 3 dozen cookies for tomorrow?’” And I’ll be like, there’s just no way.” Thankfully, she has cupcakes and cookies at the ready for those who don’t plan ahead! 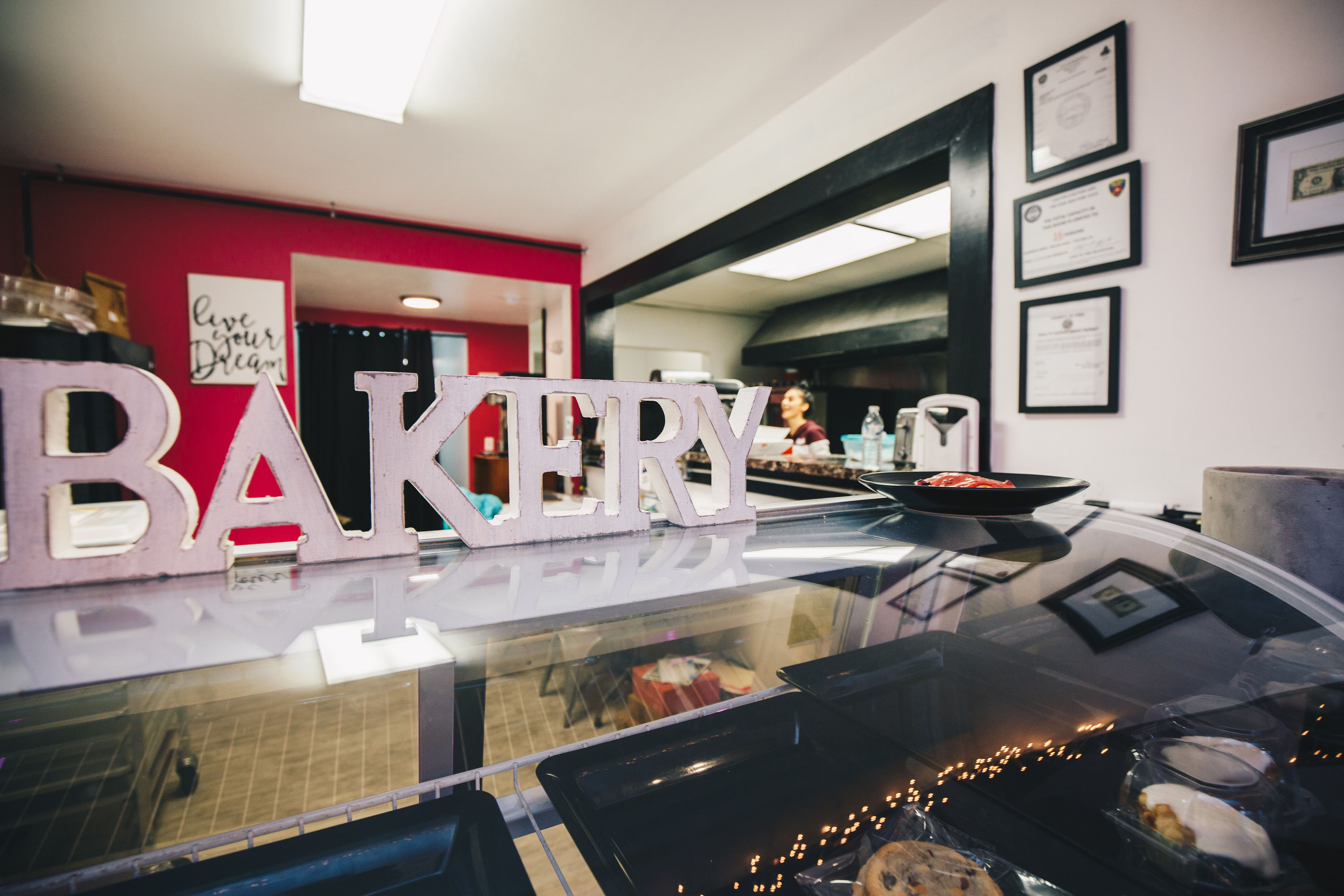 As with every success story, there is always a support network behind it, making the dream come to life. Amanda is no different, and without the help of her mother Carol, Mundy Cakes would not be the success it is. “My mom’s here all the time. She is the best mom you could ever have, she works so much for me. She loves it, and I literally could not have done any of this without her — there’s no way.”

“The response I got this Christmas on these cookies was overwhelming and I couldn’t believe it. I didn’t have time to make them and she was just pumping them out for me,” Amanda said. 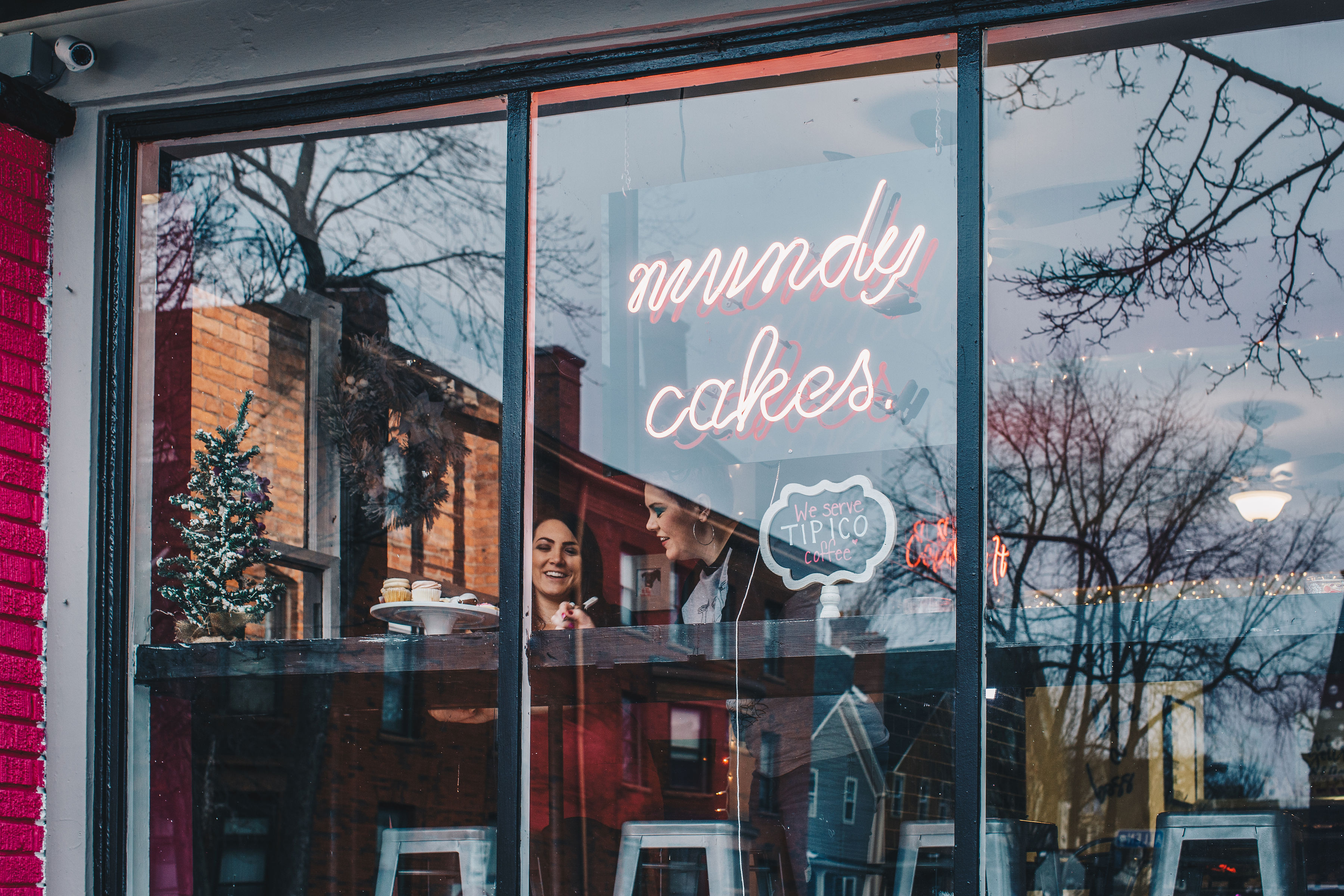 So what lies in the future for Mundy Cakes, besides a baby baker? Well, she still is the go-to baker for her family, and has an incredible list of events, one after the other, she is gearing up for in the near future. One look at her schedule would make anyone’s head spin. She’s creating the desserts for her sister’s bridal shower, bachelorette party, and the 300-person wedding in June, and also fitting in the dessert for her father’s 50th birthday. All of this is happening between May and June, with her due date smack in the middle of these festivities. This doesn’t even include all the custom orders she is sure to receive between now and then. “It’s going to be nuts. There’s a lot going on.” Thank goodness she has a great staff, and an ultra-supportive mother to help.

I can’t wait to see her business grow and will continue to stalk her Instagram feed, checking out all the adorable cookies that she makes. When I get a cupcake craving, I know where I am headed — down to Allentown to grab a cup of coffee and a scrumptious cupcake (and a cookie or two, or three) and people-watch at the counter while I satiate my sweet tooth.