From humble beginnings making custom orders here and there, to supplying Whole Foods with macarons weekly, Alexandra Robinson’s dedication, practice, and love of baking is a testament to hard work and perseverance. Out of her basement home bakery in East Aurora come macarons, croissants, scones, and specialty cakes on a constant basis. But trying to follow Alexandra Robinson’s rocket-like trajectory of her booming business is dizzying at best.

Alexandra had everything going for her that a young professional woman would want; a skyrocketing career within a large company, promotion after promotion, and no signs of her rising star falling anytime soon. So why would she quit a job that was getting better and better? The answer is that the reality of her situation was far worse than it appeared.

She had always had a love of baking and knew it could go somewhere, but sitting at a corporate desk 40 hours a week did not fit into this vision. “It’s something I really liked to do and in my head I eventually wanted to do it professionally, but I wasn’t really sure how to do that. I was in a job that was super stable and things were going really great, so why would I ever leave something that — to others — looked like a really great thing?,” she said.

An opportunity presented itself to move to Los Angeles via a promotion, so she took it. Much to the shock of her then-boyfriend’s family, who she had been dating a mere three months at the time, they both packed up their things and moved to the West Coast together. Their cross-country adventure was the stuff of romantic comedies, complete with totaling a car, renting a U-Haul, and surviving multiple near-misses with tornadoes along the way. 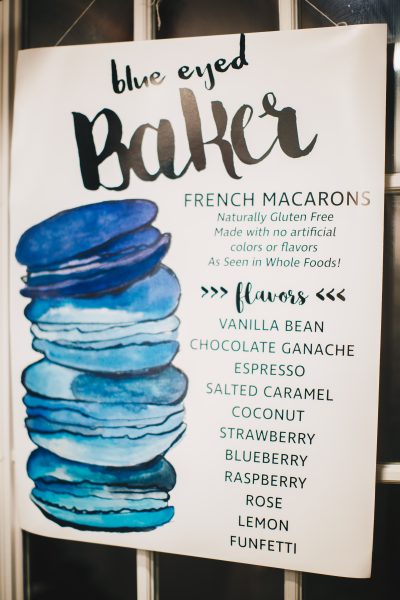 Upon arrival and still yearning to bake someday, Alex took professional-level pastry courses at night at The Gourmandise School while working full time. Her teacher there was “very focused on ingredients and doing things the right way, no shortcuts,” she said. She learned a lot there, and, coupled with all the things she learned through trial and error on her own, she felt comfortable to take the next step.

Each promotion seemed to shift her further from work she enjoyed and even further from her passion. What appeared to be an upward trajectory was rapidly revealing itself to be a dead end. The last promotion was, in sum and substance, doing something she hated, and she then knew she had to follow her passion.

“I was in the job for about two months and was like, I need to be done, I hate this, this is my time.” And with that, she decided to make her move. “I quit my job and told everyone in the corporate world that I was moving back to Buffalo to start my own baking business. Everyone looked at me like I had three heads.” After a little over two years in the City of Angels, they packed up their things once more to head back to the City of Good Neighbors.

Alex started baking and doing pastry right away, working at a restaurant in East Aurora, and doing custom orders by night. She needed to come up with a name, and with the help of her friends, the Blue Eyed Baker was born. “I liked that it was kind of an alias type name. I just wanted to be this pastry person. I thought it was cool – like, who IS the Blue Eyed Baker? I liked the mystery about it.”

The work started, as it so often does, at home. “I had an AG certificate which certifies you to work out of your home kitchen, but only to do certain things… It goes through the New York State Department of Agriculture and Markets so you can do things like process jams and jellies or make cookies to sell at farmers markets… You are very limited on the types of things you can do and how you can package them. Right away I knew I wanted to move into a separate space, for growth purposes and to be able to do whatever I wanted to do,” she said. 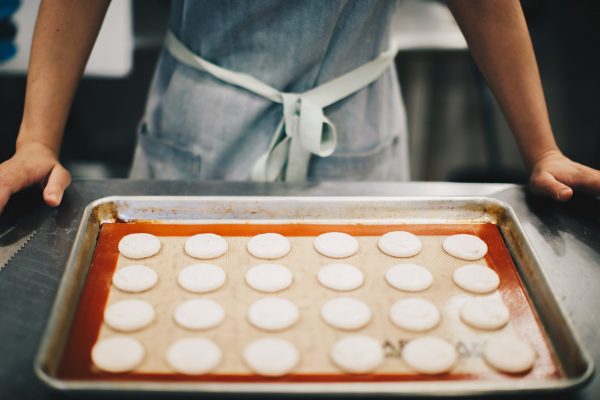 Shortly after her move back to Buffalo and starting her pastry career, Alex and her then-boyfriend Nick got engaged and then started house-hunting. After finding the perfect house, construction on the bakery began in the basement so she could expand, and was completed in about six months. She kept making custom orders and baking macarons and cakes and croissants.

That spring, her family was going on a trip to Italy to celebrate her grandparents’ 50th wedding anniversary. Seeing this incredible opportunity, Alex planned to go Italy for a couple of weeks for the family trip, then take a side adventure to France, to take pastry classes and expand her professional education. She spent over a week in southern France and in Paris, taking in-depth classes daily on croissants and macarons. Already a huge fan of the French macaron and wanting it to be a big part of her business, one of her main goals was to decide which style of macaron to make, the Italian or French. It would become one of the most important decisions of her budding baking career.

If you’re like me, you probably did not know that there are two different ways of making a macaron. The French method may be easier in theory but is more difficult to master and make consistently, while the Italian appears to be slightly more labor-intensive on the front end but produces a more stable meringue. They have a different texture to them and is ultimately why Alexandra picked one over the other.

“We do the French [method] and pretty much every other place does the Italian. The reason I stuck with the French was purely because of the way they came out, taste-wise. The texture of the French is a little bit thicker and a little less crunchy, and more pillowy, softer. There’s more of a foot, they’re less flat so there’s more height to them,” she said.

So, after a week of baking, tasting, and soul-searching, Alex decided to stick to her tried and true French method of macaron-making. The stability of the Italian method predisposed it to be favored, especially for mass production, but ultimately it was a dedication to the perfect macaron which sealed it. Her next challenge was bringing them to Buffalo.

Her first big break was getting into the East Aurora Farmer’s Market. “I was so excited because East Aurora is my hometown, with one of the oldest and best farmer’s markets. We didn’t know what we were doing, but we figured it out,” she said. 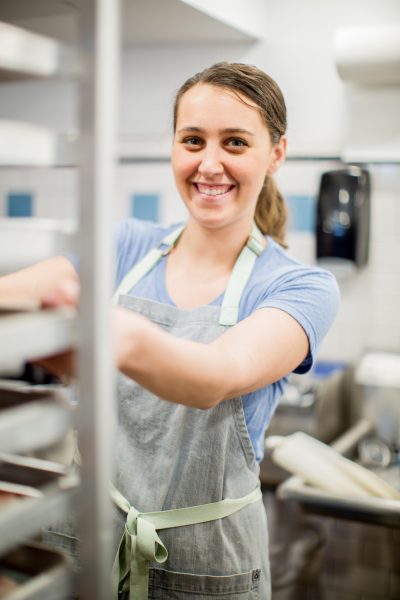 The main challenge was that their primary item, the macaron, was this new bizarre thing that the people were unfamiliar with. While they were starting to become popular in some urban and niche markets, at the time they were still relatively unknown at-large. Thanks to word-of-mouth and the support from their friends, news of these delicious new confections spread, and the product — once sampled — spoke for itself.

“Most people hadn’t heard of them but were drawn to the colors and to our display, and I think word-of-mouth started rolling. People would come and buy stuff just because it was us, and then eventually people were like, ‘Wow, this is really good.’” The macarons and croissants ended up being their best sellers at the farmer’s market. These also happen to be the hardest pastries to produce.

“Croissant and macarons, I think, are the two things that are the easiest to mess up. There are a million and one things that can go wrong with both things. We have spent so much time and energy getting our product to where it’s at. And even sometimes — I make over 1,000 macarons a week — and even I sometimes make a batch that totally flop.”

But there is another aspect of Alexandra’s macarons that put her in another class. “We use no artificial flavor, no artificial coloring. We figured out ways to color them naturally like turmeric, beet powder, and spirulina. We only use butter, not shortening, we use Belgian chocolate, and we try and source local as much as possible. We’re super particular as to what we put in our food, so yeah we’re pretty snobby when it comes to ingredients.” 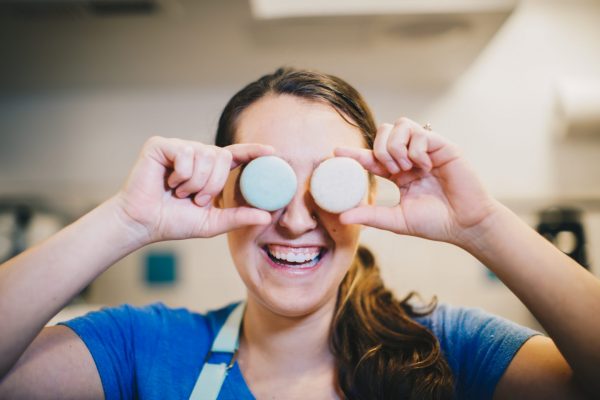 So how did the Blue Eyed Baker go from making macarons for a farmer’s market, to making 1,000 macarons for Whole Foods every week? Quality and serendipity.

One of Alexandra’s wholesale customers is Kornerstone Café & Juice Bar, an adorable place that serves up coffee, smoothie bowls, and baked goods off the main drag in East Aurora. Blue Eyed Baker makes croissants, muffins, scones, and macarons for them. A scout for Whole Foods who is responsible for finding local food items — such as baked goods — to sell in its stores, happened upon Kornerstone and Alexandra’s delicious treats. Soon, after discovering how delicious they are, they asked her to supply them with 800-1,000 macarons a week as of this past January.

“The biggest challenge is keeping up with our growth, which is a good thing,” she said. “We built that downstairs [kitchen] thinking it would last us 5 to 7 years and we could grow our family here, and it’s 3 years in and we’re exploding out of it. I thought I’d bring in one employee and that’s all we’d ever need, and we’d have two people down there. Now we’re talking about balancing four to five people in this kitchen, and we’re building a walk-in refrigerator freezer.”

As Alexandra’s macarons secure their laurels in the heart and minds (and stomachs) of people in the area, an expansion that doesn’t include people commuting through her living room to get to her kitchen are in the works. It doesn’t look like things are going to be slowing down for the Blue Eyed Baker any time soon, and you should be seeing more macarons deliciously presented for years to come.