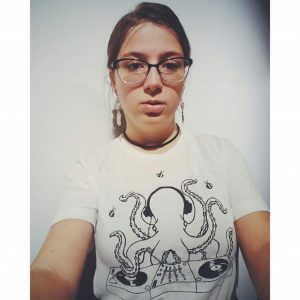 We’re gonna shake Noisemakers up a little bit this week, because sometimes aspects of the music scene need a bit of shaking up themselves, which is exactly what Alicia Greco is doing. Alicia is a multi-talented woman who has been using her energies to Be the Change she wishes to see in the electronic music world. She was kind enough to sit down with me and chat about her website Sequencer, the underground REDUX dance parties she organizes, and the path to becoming a DJ.

Sequencer was launched a year ago as a stand-alone website focusing on electronic, house, and techno music in the Northeast, Midwest, and up to Toronto. Alicia’s forte is her Spotlight articles, where she provides long-form profiles of DJs.

“The person who’s playing the music has a story and it’s important to know who they are, where they come from, and what they’re rooted in,” Alicia said. She refers to her writing style as “creative, narrative journalism.” Sequencer has been a way to marry two of her passions, writing and music, while providing quality content to her readers.

“When I found a way to blend them, it was perfect.” 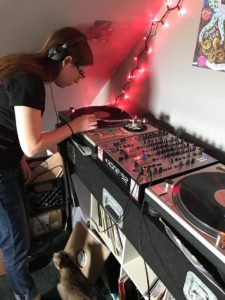 Recently Alicia has also become involved with the REDUX crew, where she collaborates to make rad underground dance parties happen. REDUX is composed of herself, Steve Gibson, Alex Morrison, and Zach Brown. By design, underground parties tend to be a little harder to find. People have to go off the beaten path to find them, and they tend to have a DIY feel, kind of like a punk house.

An added benefit to keeping parties underground is keeping participants safe. House and techno have historically been a place for marginalized and oppressed people, and grew steadily out of queer communities. “The dance floor is where you can be yourself,” she tells me, adding, “I hate going somewhere and I’m afraid I’ll be groped. We’re all trying to create an atmosphere that is welcoming and a safe space, which is why underground is special.”

Like many scenes, electronic music can turn into a boys’ club, but there are a growing number of women and queer folk actively working to influence the community. Alicia gave me the example of Jarvi, a non-binary DJ and artist from Chicago that the REDUX crew brought in for their last event. “There’s a whole side of techno that people don’t get to see…I don’t think people realize how powerful women are becoming in the scene, and that women have always been present as makers in this music environment.”

In the spirit of empowerment, Alicia recently had the opportunity to go to a peer-to-peer DJ workshop, Walking and Falling, hosted by Sam Kern — who DJs as Sassmouth — and Jarvi. While she had been watching and studying DJs for 6 or 7 years, she never felt comfortable learning and performing. “As a female it can be difficult to find an environment that’s conducive to learning,” she says, which is why this workshop was so helpful to her.

Alicia has a strong admiration for Sassmouth, a Chicago-based DJ. Sassmouth is a mom, flight attendant, and has a residency at Smartbar and her own label, God Particle.  Alicia was able to sit down and learn from Sassmouth herself at Walking and Falling. Throughout the week, she had the opportunity to have multiple DJ lessons and sit in on a radio interview featuring Sassmouth, Kiddo, and Ariel Zetina. The crown jewels were the opportunity to mix a record at Smartbar during the public workshop and to participate in a female takeover at Gramaphone, a record store where all the greats have worked.

It’s been a busy few years for Alicia, and it’s only the beginning. She’s actively working to expand and develop all of her projects, including recruiting more writers for Sequencer, with a focus on introspective, research-based long-form pieces. Alicia wants to leave a positive impact on the local scene, with a particular focus on developing the connection with the queer community. She plans to continue the spirit of lady empowerment and develop a peer-to-peer DJ workshop for women who spin in Buffalo. “Rust belt cities have a unique energy,” she says, an energy she hopes to manifest and grow in the best ways possible.