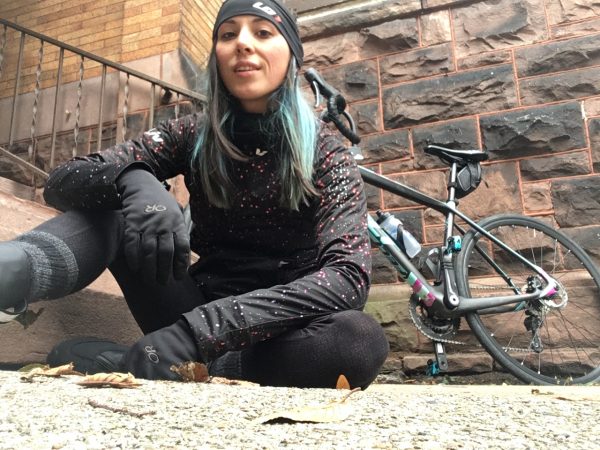 Jenn Kowalik didn’t learn to ride a bike until she was 23 years old. After moving to Buffalo from Brooklyn, she found herself without transportation and not able to rely on Buffalo’s public transit system. She absolutely hates driving. So, she bought a shitty bike and used it to commute to and from work. That is how and why Jenn learned to ride a bike.

Three years ago, Jenn began working at Campus WheelWorks, 744 Elmwood Ave. She says that she didn’t know much about bikes at all when she started, but learned quickly from just being in the shop. She and another employee began women-only rides during her first year. It was great, empowering women to ride bikes on the road and to ride together.

Jenn started seeing the same faces every time, which wasn’t necessarily a bad thing, but she felt like there were more people in the community who needed this kind of space. Jenn proposed changing the women-only rides to FTW rides — Femme/Trans/Women rides. “Most people [interpret FTW] to mean ‘For the Win,’” she said.

These events have been a huge win for the cycling community. Jenn says she typically has a turnout of 13-20 riders, although she’s had turnouts as big as 31. There is usually an FTW ride once a month on a Sunday. According to an upcoming FTW event at Campus’s Facebook page, “FTW events are created to help build the femme/trans/women cycling community in Buffalo, NY. They are sponsored by Campus WheelWorks and put on by Jenn with the help of various wonderful women.”

The past few months have not been ideal for biking, due the icy road conditions and the temperature. Besides the FTW rides, Jenn does regular Tune Up clinics at Campus and has recently become and ambassador for Liv, a cycling brand completely dedicated to women. I asked Jenn to tell me a bit about bicycle design. Back in the day, she says, the sloping top tube allowed women to ride bikes in skirts, but that is no longer necessary.  Nowadays, there is an emphasis on proper frame geometry and touch points. Touch points are like handlebars and saddles.

Jenn admits she’s still learning a lot about the brand and only became an ambassador for Liv this year. One thing that Jenn is sure about is that, as an ambassador for Liv, she’s a resource for women in her community. Jenn had been a manager at Campus for a couple years prior to her ambassadorship, but she admits that this role as a leader a public resource is a new experience for her. “I’ve always been kind of introverted, but I’m excited to meet new people.”

Jenn hasn’t been hibernating this winter in terms of fitness and reaching out to her community. On February 3 she held a free yoga sesh for everyone at Love in Motion. I asked Jenn, why yoga? “Well, if you’re a cyclist, you’re probably tight. If you’re not a cyclist, you’re still probably tight.” We could all use a little more yoga in our lives, especially in the colder months.

I confessed to Jenn that I haven’t ridden a bike in several years and might be intimidated to start riding a bike again in Buffalo. I asked her what she would say to someone who was intimidated by cycling. “I really just want to hear where people are coming from, so I can share where I came from, so we can relate.”

Jenn shared with me that she struggles with depression and cycling and other movements help her cope with that. “I know that if I’m not cycling or moving, I’m done for,” she said. I asked if she had any advice for people who are struggling to find the motivation to be active. “Whatever you think you need to do, you just have to try it. No one is going to make you do it, but you’ll feel better if you do it.”

You can find Jenn at Campus WheelWorks every day except Wednesdays and Saturdays. When the weather warms up a bit, FTW rides will start back up one Sunday per month, although she’s hoping to add another ride per month this year. 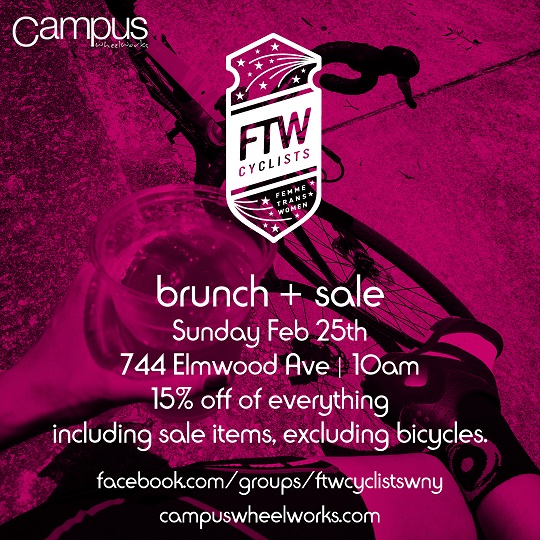 Jenn has a couple other events coming up. Tonight she will be hosting the Liv Shifting 101 + Intro to Indoor Cycling FTW event at WheelWorks. She’s going to be talking about why and when to shift gears, as well as indoor cycling. This event is already sold out, but if you’re interested in something like this and weren’t able to grab a ticket, you can email Jenn at [email protected].

This Sunday, February 25, Jenn is hosting FTW Brunch + Sale. That’s right. Fucking brunch and 15% off everything, including sale items at Campus, but excluding bikes. It’s an opportunity for you to get a deal on cycling essentials, grab a bite, and chill with Jenn. Brunch starts at 10 and ends at noon. It’s free and you do not have to RSVP, but you can definitely do so on the Facebook event page.

Not enough for you? Campus has a free, Basic Maintenance Clinic on Thursday, March 8, at 6:15 p.m. Email Jenn to RSVP as space is limited.