In the past year, I’ve been “ghosted” twice.  I’ll hang out with a person for a few months and everything seems to be going fine, and then all of a sudden they cut contact with me completely.  What’s going on with this?

As anyone who has been single for more than two days over the last decade can tell you, dating is tough. The rise of social media and online dating has changed the playing field completely, resulting in a crop of people with little to no guidance on how to navigate this uncharted territory. While there are plenty of Thought Catalog articles talking about Ghosters and Ghostees alike, let’s delve a bit deeper into some common relationship dynamics that contribute to this social phenomenon.

For those unfamiliar with the term, “Ghosting” is slang for “a total douche move.”  Picture this, you’ve been dating (or “seeing” or “talking to” or whatever you want to call it) someone for a few weeks.  You exchange flirty emojis, go out from time to time, and maybe hook up.  Things seem to be going well, until one day they go silent. Messages are never returned, calls go to voicemail. You’ve been ghosted, left only with a few hefty bar tabs and the feeling of “what the hell just happened?”

Gwen Stefani, Queen Of The Ghosts

People give a lot of different reasons for ghosting, from “they were too clingy” to “they didn’t look like their profile picture.” Some people may just not be feeling it after one or two dates, which is totally reasonable. It’s kind of lame that they couldn’t just say, “Hey, I don’t see this going anywhere,” but it’s really only a couple hours of time lost, so it’s not a Huge Deal. It’s the people who just disappear after months of coupling up that are the real culprits.

I suspect that a lot of ghosting happens because of the classic Pursuit and Withdraw cycle. Basically, one partner is the pursuer and keeps initiating contact. The other partner interprets this as clinginess and withdraws, saying to themself, “could you just get off my ass??” Pursuer amps up their attempts at connection, while the withdrawer pulls themselves away further. Both annoy the hell out of each other until they either deal with it or they end it. 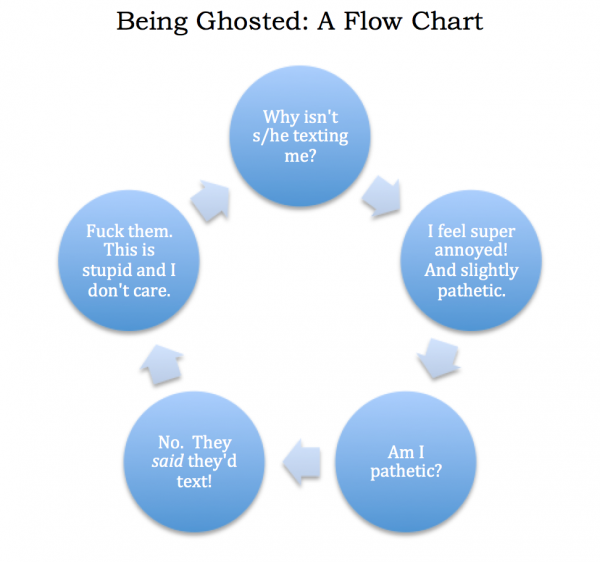 I’ve seen the pursuit and withdraw cycle with my couples in treatment many times. Often, I’ll pull the ol’ paradoxical intervention and tell them to not talk to each other for a full week. No texting, no Facebook, nada. Then, after a week we can come back together and each person has greater clarity on their role in the cycle. While this can be hell for the pursuer, this can give the withdrawer a chance to “reset” and to see how they contributed to this communication breakdown.

While the “week off” is great in therapy, it doesn’t really help the casual dater. If you’re considering ghosting someone, it can be helpful to say, “Hey, I really just need a day or two to myself, can you please give me a little space? I promise we will talk about this in a few days.” The thing is you actually have to talk about it after a few days. It’s all about creating healthy boundaries with dialogue and a dash o’ self-reflection.

Which brings me to my next point: have some conversations. Socially, we over-share everything online yet we seem to have lost the ability to sit down and talk about how we’re feeling. Modern dating is saturated in ambiguity; people are “talking to each other” not “in a Relationship.” Many people are afraid to call anything what it really is, so when someone catches feelings or conversely, falls out of love, it’s hard to own up to that. 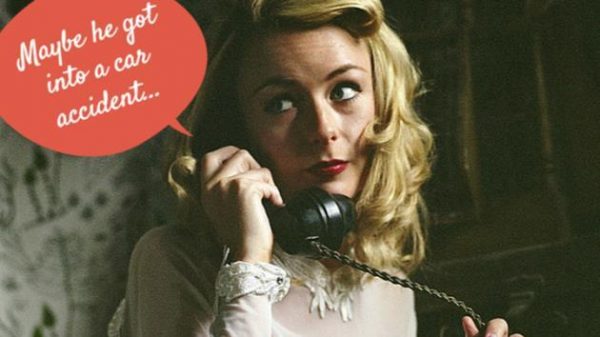 But is ghosting always a dick move? Sadly, I think some women ghost because they’re afraid of a nasty encounter. A quick google search of “woman shot after rejecting a man” pulls up dozens of news stories of The Worst Case Scenario. While we all know #NotAllMen are violent, it is a real concern that #YesAllWomen have. While that may not be the first thought that a person has when wanting to end a relationship, it is in our heads and it does inform our decisions.

To the ghosts out there, let’s cut the crap. Unless someone has given you a Really Good Reason to go incommunicado (like propensity towards violence, lying about something absolutely major), it’s time to learn to communicate with other people. If you’re busy, not into it, or just plain avoidant, it’s OKAY! Stringing people along and jumping ship is not.

To the ghostees, keep on keeping on. You will probably never get the answers to your questions, the burning “Why? What happened?” The thing is, you don’t need to let it keep you up at night. If you’re allowing someone to make you feel like garbage, you’re giving them power that they most deff-o do not deserve. Ferrett has some great words on the subject here.

Remember, Ghosts and Ghostees, be kind out there. <3