“What’s up?? Do you want some whiskey?” Shianne asks nearly every time I walk through the door, whether I’m stopping by for a social call or an appointment. There is almost always a small crowd of women hanging out at 138 Elmwood Avenue, home of Shianne Waxing Studio and the clan of women who run their businesses collectively out of that location. Often, a woman sits in the chair at the front of the room, where Shianne diligently works to shape their eyebrows, while other clients and friends sit and chat.

I’ve never been to a salon with an environment quite like this: there is no stuffy music or vanilla aesthetic. The room itself is loud, with pop art on the walls, the works of local artists, and records sealed across the floor. There is always music playing. Sometimes it’s A Tribe Called Quest. Other days it’s The Grateful Dead. If I ask nicely, she’ll throw on The Misfits.

The shop was born out of a love for music. The women that work here all share this passion, and most of them met through it. Holly Rutkowski sits at the front desk, answering the phone and emails. She met Shianne and fellow waxer, Julie Campanella, through music festivals and shows. The joke around the shop is, “just because Holly isn’t knuckle-deep in pussy doesn’t mean that she’s not just as important as the rest of us.” The former social worker and homeless advocate was living out in Syracuse, but had to come back to Buffalo to take care of her family. As luck would have it, Shianne needed a receptionist and put Holly to work.

Holly says, “I think it’s great to work with a bunch of empowered women. It’s a dynamic I haven’t worked with before.” She is clearly very appreciated for her work. She schedules all the appointments and keeps everything tidy and together. “Without her, this place would be a shit show,” say Julie and Shianne, nearly in chorus. 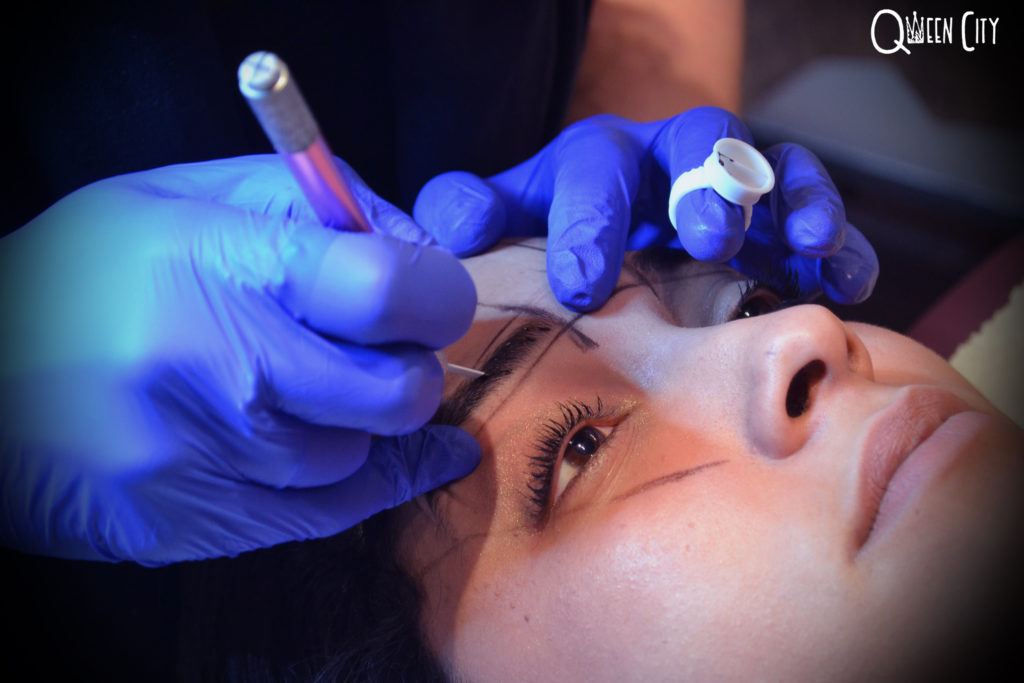 Julie Campanella has been in partnership with Shianne for the longest amount of time. She apprenticed under Shianne for a year, and is now a licensed waxer. I was intrigued by her newest service, microblading. For those who don’t know (as I didn’t), microblading is relatively new in the salon world and it provides a visual reconstruction of the eyebrows. Many people over-tweezed their eyebrows in the ‘90s and now suffer the consequences. Microblading is a semi-permanent procedure that offers a solution to over-tweezed, scarred, or bald brows. She uses what looks like a tiny X-ACTO knife to pigment the skin, almost like tattooing. Nearly everyone is a good candidate, whether they would like fuller looking brows or are trying to cover up a scar or over-tweezed area. Julie offers free consultations and is more than happy to educate people on this up-and-coming salon service. In April she will begin to offer scalp micropigmentation, where she will reconstruct hairlines. “It’s kind of like a permanent fade or edge up,” she says.

In the back room resides Stephanie Jovic, a licensed esthetician, wax specialist, makeup artist, and resident Lash Guru. She has been a part of the crew since May 2016, following her certification in makeup artistry and eyelash extensions. In November she was certified in giving lash lifts, which she was kind enough to demonstrate on me. While I lay on my back, eyes closed, she expertly applied perm solution to my eyelashes and talked shop with me.

Stephanie explained that lash extensions are a time-consuming process, although the results are dramatic. It’s not uncommon for her to spend over two hours applying lash extensions. For a lash lift, however, it looks far more natural and takes less time—about 45 minutes total. The results are killer, though, and they can last 8-10 weeks. She even tinted mine purple. There is a reason lash lifts are rapidly becoming her most sought-after service.

Stephanie echoed the same spirit of collaboration as the rest of the women: “We’re all so diverse but we get along so well. We all bring something to the table. I’ve never had a job where I looked forward to coming to work before.” All of them will bounce clients off of one another. Stephanie uses hard wax, while Shianne uses soft. Each one’s products are more ideal for some than others. Because this is understood, there’s no competitive vibe between the workers like you might find in some traditional salons.

Why wouldn’t I hire the people I love and trust?

While Amber Fath is not physically under the same roof as the rest of the crew, her services are still on the menu. Amber, a licensed esthetician since 2008, offers European facials and peels. She used to have a workspace downstairs, but the music of the shop was a bit loud for her services, which are intended to be relaxing. Now, her workspace is located next door, but you can still find her in the shop often, which she calls her second home. “I have twenty minutes to kill, I’ll come over and hang out,” Amber says.

Her credentials are beyond legit, having trained under CIDESCO and received a second degree from the Physicians Alliance. Amber uses all natural products — mostly fruits, vegetables, oils, and spices — to treat skin conditions. She tells me, “I love helping people. There’s instant gratification in seeing a condition and knowing how to treat it.”

And then, of course, there’s Shianne Velletta herself. After studying special effects and prosthetics makeup in LA, she became a licensed waxer and has been in the biz for the past 6 years. She opened her own shop because having a boss “set [her] up for failure.” She explains, “I don’t want someone telling me what I can wear and when I can go on vacation.” This is a big reason that the other service providers are independent contractors: “What kind of a person takes half of a single mom’s money?” she says. This is why she hires her friends, despite traditional business advice against the practice: “Why wouldn’t I hire the people I love and trust?”

Intuitively, Shianne knew there was not only a need for her services, but for her delivery of those services. “I knew that to be most successful, I had to be myself.” She doesn’t cater to anyone, but instead tries to make sure everyone is having a good time. “Taking your pants off and having someone all up in your genitals is a really personal experience,” she explains, “so making people laugh and be comfortable just felt natural to me.” Everyone at 138 Elmwood is committed to making everyone feel accepted: they provide services to all genders, orientations, sizes, and shapes in a shame-free environment.

Shianne’s Waxing Studio is simultaneously the most professional and chill salon experience to be had. The services provided speak for themselves, although their many happy clients will be happy to tell you just the same. Drop by and check it out for yourself!

Photos {minus Shianne, above} by Afura Fareed. See more on the Qween City Facebook page.